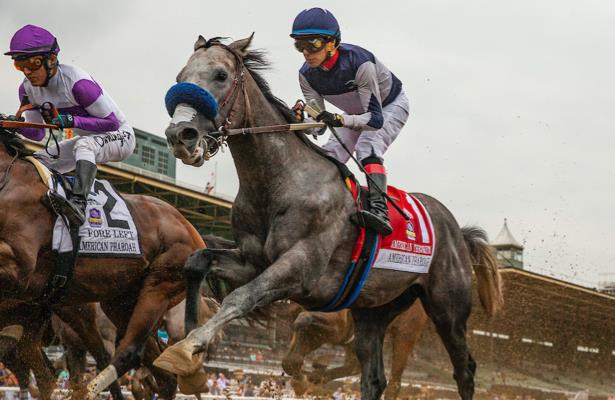 Kretz Racing’s American Theorem, who bypassed the Breeders’ Cup Juvenile after running second to Eight Rings in the American Pharoah Stakes (G1) at Santa Anita Park, has returned to light training with intentions to try the 2020 Kentucky Derby trail.

Trainer George Papaprodomou said the son of American Pharoah is “back in training and doing good.” However, he plans to take his time, adding that it could still be a while before American Theorem returns to the races.

“We’re not looking at a race yet, but we’re probably going to run him in March,” Papaprodromou said.

“He ran a huge race in the American Pharoah — just got a little tired at the end,” Papaprodomou said. “He didn’t have much time between winning his maiden and then just three weeks later trying two turns for the first time. So he really ran great.”

American Theorem was slated to try the Breeders’ Cup Juvenile five weeks later, but in the lead-up he developed “a little bit of a shin issue,” the trainer said.

“It was nothing major, but I just wanted to back off him,” Papaprodromou added. “It wasn’t something where he needed three or four months. But I think we did the right thing.”

That day, the favorite, Dennis’ Moment, stumbled at the start and lost all chance, while Eight Rings didn’t back up his last-out performance, fading to finish off the board. It opened the opportunity for longshots Storm the Court, Anneau d’Or and Wrecking Crew to fill out the board.

“It is a shame considering what happened [in the Juvenile],” Papaprodromou said. “We could have won that race, but what are you going to do?”

If American Theorem was to progress on the Triple Crown trail, he would be the first Kentucky Derby starter for Papaprodromou and Rustin Kretz’s Ketz Racing. The former has been training since 2003, while Kretz has owned racehorses since becoming enchanted by the sport while attending the 2010 Run for the Roses. He reportedly returned from Louisville and told his wife, “I have to have a racehorse.” Kretz is now Papaprodromou’s biggest client.

“If it wasn’t for him, I probably wouldn’t even be here right now,” said Papaprodromou, who has about 35 horses in his care with roughly half of those owned by Kretz.

American Theorem’s two promising outings as a juvenile earned him a spot in Pool 1 of the Kentucky Derby Future Wager. He closed at odds of  54-1, the sixth-highest of the 23 individual betting interests.

» Horse: American Theorem
» Race: Kentucky Derby (2020)
About the Derby Radar
Back for the 2020 Kentucky Derby trail, Horse Racing Nation's Derby Radar seeks to identify promising maiden, allowance and even stakes winners who could target points-paying preps down the line. We'll cover the buzz horses, of course, then using a systematic approach based on past years' Derby contenders identify other talented colts moving up the ladder.
Did we miss one? Email editor Jonathan Lintner (jlintner@horseracingnation.com) if you know of a horse that should be on the radar.
• 2020 Kentucky Derby contenders

Jockeys McCarthy and Davis postpone wedding to COVID-19
More than just another mount or another winner, Tr...